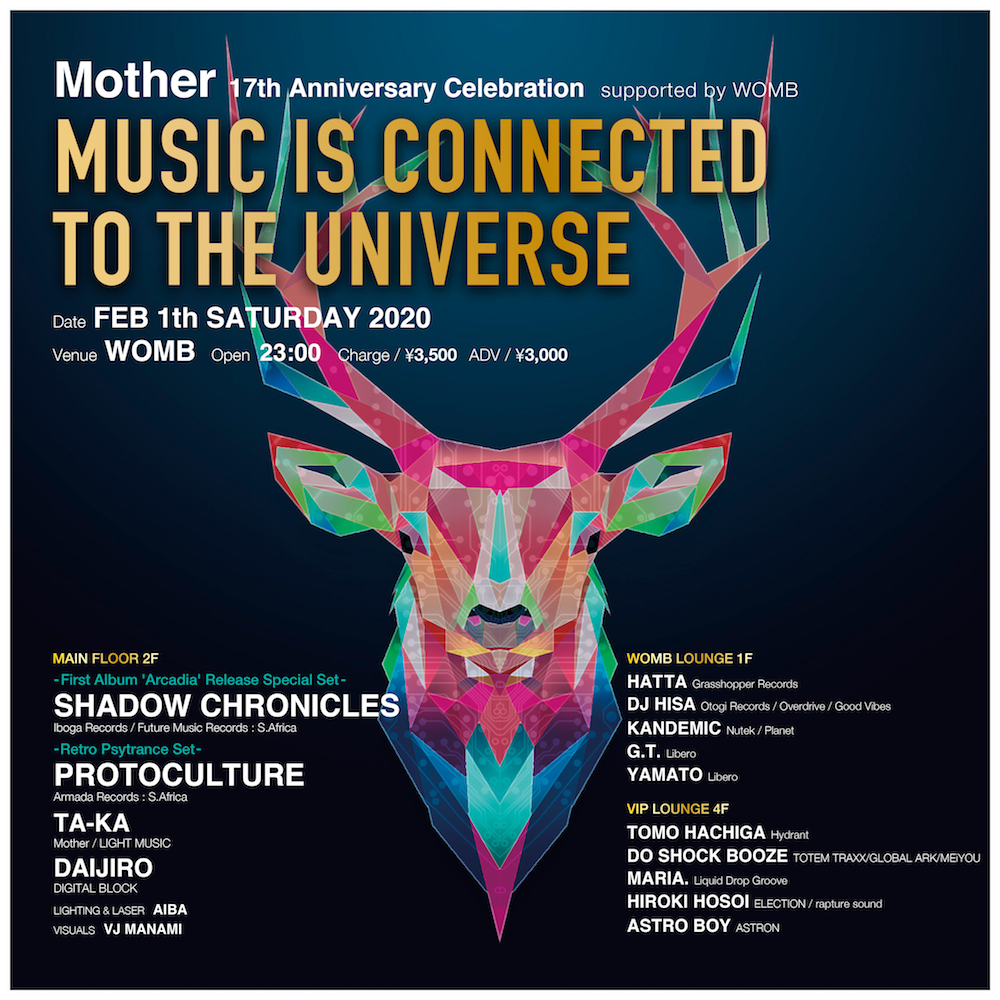 Having continued to propose parties that cross genre barriers and that have a strong narrative, Mother is now welcoming its 17th anniversary. SASHA, MARCUS HENRIKKSON, PATRICE BAUMEL, and DJ NOBU...All of them produce a unique perspective on the world, and Mother in 2019 that assembled together all of the amazing musicians and all of you was able to host incredible parties overflowing with color. We are very grateful to all of the audience members who have continued their support, and all of the staff involved.
Looking back over Mother's 17 years, there was also the best music and environment possible, along with all of your smiles. At the numerous parties held at leading clubs in Japan such as WOMB, ageHa, VENT, VISION, contact TOKYO and more, Mother's true worth was shown in the creation of unique spaces embodying one night stories that cross genre barriers. We have stood out even in the Tokyo scene that is only getting bigger, and we have received warm support from so many people. We believe those irreplaceable days that we have made it through with all of you have left their mark on the dance music scene. This commemorative night is a one night festival that looks back at the days we spent with all of you and the musicians brought together that have constructed numerous famous scenes with us since the birth of Mother.
For the headliner, we have PROTOCULTURE who has been doing great work as a musician for ARMADA MUSIC spearheaded by ARMIN VAN BUUREN, and he's the best one there is to talk about Mother's history. We will have a Retro Psytrance Set that weaves together both the new and the old including excellent music from years gone by that are perfect for celebrating the 17th anniversary festival. And this time around, PROTOCULTURE will perform with his Psytrance Music's alias "SHADOW CHRONICLES" as part of his newest album "ARCADIA" Release Special Set as a doubleheader for this Special night.
In the middle of outer space adorned with AIBA and VJ MANAMI, we want to deliver to all of you the "magnificence of music" and the "enjoyment of parties" via stories limited to one night started by veteran disk masters TA-KA and DAIJIRO who know more about Mother's perspective on the world than anyone else. With the conceptual organization of this performance, you will be able to experience various styles of dance music in one night that is worthy of the 17th anniversary festival. We await all of you who will be coming from the bottom of our hearts.
Protoculture live at AFAS Live - A State Of Trance 836 - ADE Special